Why We Need Creative Challenges

Note: Connie Mann is a much-loved friend of the Ancient City Romance Authors. and we look forward to seeing her beautiful smile at our conference each year. When we heard the news of her novel-turned-screenplay-turned-film, we were so excited for her that we had to share with all our friends.

One of the great struggles for writers, especially those who write commercial fiction, is to write, “the same, but different.” We scratch our heads, trying to make sense of it. How do we keep fitting our writing into accepted norms, while still making it new and fresh?

I learned, quite by accident, how writing something in an entirely new genre ignited my creativity and passion for writing all over again.

Several years ago, my son Ben Klopfenstein, who works in the movie industry, asked me if I had any stories that might work as a screenplay. He had several requirements: it had to be set locally, couldn’t have too many characters and couldn’t have oodles of locations. (All things that keep a movie budget tight.)

After he read what I gave him, he said, “Could you turn it into a screenplay?”

Then I went scrambling for information, because screenplays and novels are two completely different animals. In a novel, you can have a character think for pages on end. How do you show that on screen? 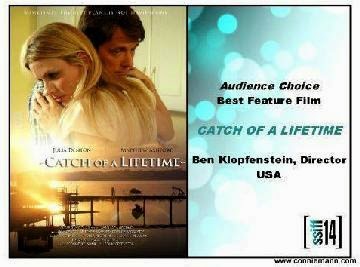 It took six intense weeks to take Catch of a Lifetime from novel to screenplay, followed by months of tweaking and pre-production work. I was privileged to be one of the producers and our house become movie central for several weeks, with props stored in every available location, the cast and crew being fed out of our kitchen, make-up applied in the hall bath. It was crazy and intense, but the most amazing part was seeing my words brought to life on screen. There is no thrill quite like it.

My son spent another year and a half (yes, you read that right) editing, tweaking, adding music and doing all the other magic that makes a movie wonderful! Ben submitted Catch of a Lifetime to the Silver Springs International Film Festival and we were thrilled when it was accepted. It was shown at a local theater a few weeks ago, so we all got to see it on the big screen for the first time.

We were even more thrilled when, at the awards ceremony, Catch of a Lifetime was named Audience Choice for Best Feature! This mama couldn’t have been more proud of her very talented son!
I was also incredibly glad I’d accepted that creative challenge and tried something new.

Connie Mann loves stories of suspense, adventure and second chances. She encourages busy women through her blog:  www.BusyWomenBigDreams.com and is the author of Trapped!, Angel Falls, and Catch of a Lifetime.  She’s also a USCG-licensed boat captain, so when she’s not writing, she’s usually on Central Florida’s waterways with local schoolchildren or her fabulous family. Please visit her online at: www.conniemann.com.

Catch of a Lifetime: http://www.imdb.com/titl

Join us on May 24 for a workshop on Tight Writing. Abigail is a Boston-bred Yankee now eating grits and saying "y'all" in North Central Florida. She dreamed more of being a stage actress or joining the CIA than being an author. While she still enjoys participating in community theater productions and singing karaoke, the secret-agent career was replaced by hours at her computer, writing passionate and playful contemporary romance.

Abigail lives with her husband, two kids, and one crazy princess puppy. You can keep up with her on Goodreads or on Facebook at www.Facebook.com/AbigailSharpeBooks or on her website - www.abigailsharpe.com. 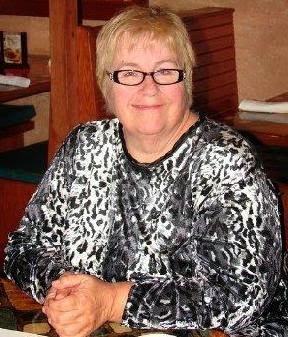 Diane Burke will join us this month or present Gems From the Treasure Chest, words of wisdom from herself and other successfully published authors. She'll share tidbits of information on plotting, characterization, and other topics she has picked up from her own experience as well as a variety of authors with whom she has formed bonds.

Diane is a multi-published author who has won several awards such as first place in the Daphne du Maurier Award for Excellence in Mystery/Suspense. She was one of three finalists in the prestigious ACFW Carol Award (previously book of the year).

Diane lives in Florida nestled between the excitement of the theme parks and Daytona raceway and the quiet historical streets of St. Augustine. When she isn’t struggling with never-ending writer’s block and procrastination, she spends her time, preferably on windy or cold days, at the beach when few people are nearby and she can just sit and appreciate the peaceful beauty of nature.

She loves to read, is learning to crochet, has dabbled in painting with watercolors, and hopes to someday travel the country teaching classes, meeting people, and helping them make their dreams come true. 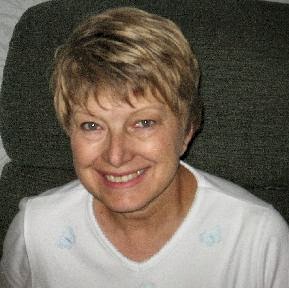 The March 22, 2014, workshop TURN PASSIVE WRITING INTO ACTIVE READING addresses the ubiquitous rookie mistake of telling instead of showing. Through examples and exercises, Cheryl Norman shows you the red flags of telling and teaches the author's bag of tricks in revising passive writing into an engaging story. Cheryl bases her workshop materials on years of contest judging and editing, as well as her experience in leading novel writing and self-editing workshops.

Cheryl Norman grew up in Louisville, Kentucky, where she wrote her first mystery at the age of 13.  She earned a BA in English at Georgia State University in Atlanta. After a career in the telecommunications industry, she returned to fiction writing and won the 2003 EPPIE award for her contemporary romance, Last Resort. Her debut with Medallion Press, Restore My Heart, led to a mention in Publisher's Weekly as one of ten new romance authors to watch. Running Scared, a romantic suspense set in Jacksonville, Florida, and Washington D.C., received a Perfect 10 from Romance Reviews Today. Reviewer Harriet Klausner calls her writing "Mindful of Linda Howard ... " She just signed a six-book contract with Turquoise Morning Press for a category “sweet” romance e-book series. The first, Return to Drake Springs, will be available in October, 2014.

Her non-fiction writing includes four cookbooks and an award-winning blog, Hasty Tasty Meals. In addition to writing, Cheryl works with breast cancer survivors to raise awareness about early detection and treatment of the disease. She also helps writers with grammar via her Grammar Cop blog, newsletter articles, and workshops.

Come and Share Some Chuck Wagon Grub With Us This Saturday! 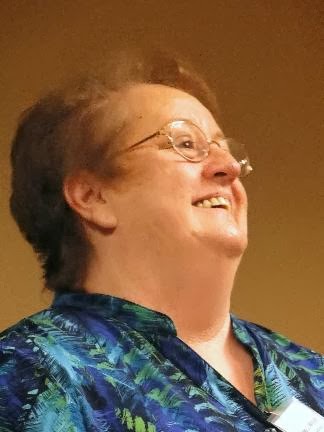 The February ACRA meeting will be held at member Dolores Wilson's home north of Jacksonville.

PLEASE NOTE - this is for the February 22, 2014 meeting only. In March, we'll resume meeting at the library as usual.

If you plan to attend, please email Dolores to let her know, and for directions. This is important for two reasons:

Dolores and her pal Vickie King will present a surprise program.

This would be a good time to bring a friend who has admired what you do, and expressed an interest in writing. Joining ACRA (via RWA) is a great first step for anyone who wants to write. Everyone is welcome, but we ask that only those 18 or older attend our meetings.

PS: Dolores will make a surprise announcement at this meeting. If you love her writing, you do not want to miss this.

PPS: Seriously, you do not want to miss this! (See Dolores smiling in the above photo? She's going to smile bigger than that when she shares her news.)

Posted by Ancient City Romance Authors at 10:49 AM No comments:

Thank You ~ from member Skye Taylor

A year ago my heart and life were torn apart by disbelief and anguish when my little grandson, Philip was killed in a freak playground accident. I had already lost one grandson to SIDS and I couldn’t believe this was happening again to my family.

For the second time, I had to look into the devastated eyes of my own child and know there was nothing on earth I could do to take away their pain. Two beautiful little boys taken from us far too soon. Two little boys who barely got a chance to live and love and laugh and play and who would never grow up to be men.

It has been a difficult year. All those firsts without Philip – Thanksgiving, Christmas, his birthday, Mother’s Day, and family vacations. And as September approached and the anniversary of his passing arrived, we were all reminded anew of the outpouring of love and support we received from so many.

The members of Ancient City Romance Authors were there for me and it meant more than words can say, even for someone who puts things into words every day. And now our annual conference approaches and I am reminded of last year’s event when I arrived, still reeling with shock and just beginning to grieve. And of the gentle, acceptance from all of you as you wrapped me in your arms and said, “I’m sorry.”

Thank you for your patience with me then and in the weeks and months that followed. Thank you for Philip’s star and for the little silver charm to wear in his memory. And thank you most of all for being the wonderful caring community you are.
Posted by Ancient City Romance Authors at 11:30 AM 1 comment: 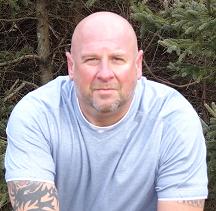 ACRA meets on the 4th Saturday of each month at the Southeast Regional Library, Deerwood Park Blvd, Jacksonville FL. Phone 904-996-0325. Bring your lunch and enjoy the company from noon-12:30, followed by a workshop at 1pm.
On rare occasions, ACRA meets at a different location. Please check our website or blog often for news, updates, and notifications. ACRA does not meet in Nov & Dec.